Volterra is one of the finest hilltop towns tucked away in the heart of Tuscany, and is only a short distance from Florence 72 km (43 miles), Siena 50 km (30 miles), Pisa 64 km (38 miles), S.Gimignano 29 km (17 miles) and the Tyrrhenian cost. Volterra, 545 metres above sea level, dominates and divides the Cecina and Era valleys. The hill upon which the city stands has been continuously inhabited for more than 3000 years. The city has significant architectural monuments dating from the fourth century BC, onward. The current image of the city is still defined by the medieval layout, with winding streets, and well preserved defensive walls. The walls offer dramatic views of the surrounding landscape, on a clear day reaching as far as Pisa, or even the island of Corsica (70 miles away).. 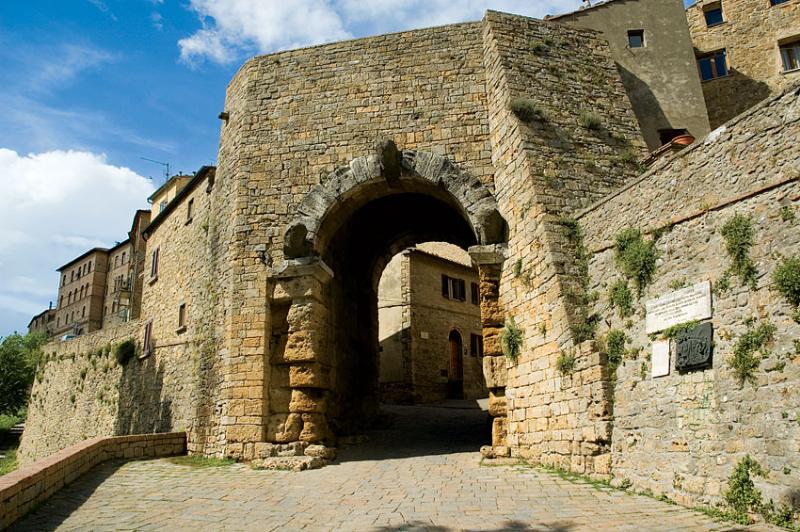 Porta all’Arco – Etruscan gate in Volterra, from V century BC

Historically, the economic status of the city has been very strong. This has been due in part to employment in the local health institutions (general hospital and mental hospital) serving the entire province, schools, the location of the state prison and, most of all, the tradition of the local arts and alabaster industry. Based on their economic success, Volterra has developed a very dynamic cultural program, which peaks every year during the events of the Teatro di Volterra, an international theater festival, with performing groups and visitors coming from around the world. Other annual cultural events include the Medieval Festival, alabaster sculpture symposiums, local and international art exhibits, etc. Volterra continuously combines the tradition of fine artisanship with a strong interest in contemporary arts.

Transportation:
Travel within Volterra as well as to other areas of Tuscany can be easily arranged through the use of public transportation (buses) or through the local car rental service (Autonoleggio Bacci Travel). The most convenient bus connection is to Pontedera (every 1-2 hours), from which a train can be taken to Pisa or Florence (every 30-40 minutes). Fast Eurostar Trains from Florence place visitors in Bologna in Â½ an hour, in Rome in 1 Â½ hour, and more. Cheap airlines such as Ryanair connect Pisa and Florence with other European cities, with tickets as low as $50-80 one-way to Paris or Berlin. 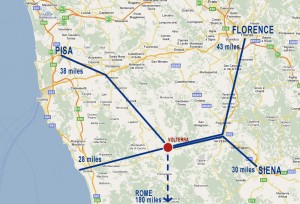